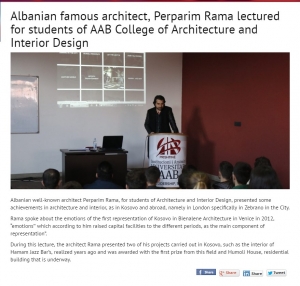 Albanian well-known architect Perparim Rama, for students of Architecture and Interior Design, presented some achievements in architecture and interior, as in Kosovo and abroad, namely in London specifically in Zebrano in the City.

Rama spoke about the emotions of the first representation of Kosovo in Bienalene Architecture in Venice in 2012, “emotions’’ which according to him raised capital facilities to the different periods, as the main component of representation”.

During this lecture, the architect Rama presented two of his projects carried out in Kosovo, such as the interior of Hamam Jazz Bar’s, realized years ago and was awarded with the first prize from this field and Humoli House, residential building that is underway.