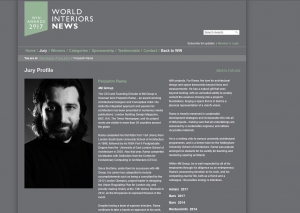 The CEO and Founding Director of 4M Group is Kosovan born Perparim Rama – an award-winning Architectural Designer and Conceptual Artist. His distinctly integrated approach and passion for architecture has been presented in numerous media publications: London Building Design Magazine, BBC, RAI, The Times Newspaper; and his project works are visible in more than 20 countries around the globe.

Since that time, aside from his successes with 4M Group, his career has catapulted to include accomplishments such as being a consultant for the 2012 London Olympics, project leader in designing the Urban Regulating Plan for London city, and proudly making history at the 13th Venice Biennale in 2012, as the first person to represent Kosovo in the event.

Despite having a team of superior directors, Rama continues to take a hands on approach to his work, and is intimately involved with each and every one of 4M’s projects. For Rama, the love for architectural design and space transcends beyond lines and measurements. He has a natural gift that sees beyond looking, with an unrivalled ability to acutely cement the essence of being into a project's foundations, forging a space that is in itself is a physical representation of a client's vision.

Rama is heavily immersed in sustainable development strategies and incorporates this into all of 4M projects– making sure that all undertakings are assessed by a sustainable engineer, and utilises recyclable materials.

He is a visiting critic to various university architectural programmes, and is a former tutor for the Nottingham University School of Architecture. Rama was popular amongst his students for his avidity for teaching and mentoring aspiring architects.

Within 4M Group, he is well respected by all of his employees through his diligence as an entrepreneur, Rama's unwavering devotion to his work, and his compelling zeal for life, both as a friend and a colleague. His positive energy is infectious.