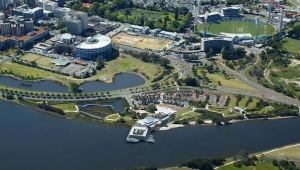 The luxurious lures of Ku De Ta in Bali are one giant step closer for Perth’s party people after the world-famous brand was granted a conditional liquor licence for its first foray out of Indonesia.

Ku De Ta Perth is part of the new $18 million tourism and hospitality development On The Point that will feature food and drink venues, boardwalks, function centres, a rooftop garden and boat moorings.

Owner Steve Palmer told WAtoday the interior fitout for the vast venue was currently being installed and finalised, with the venue expected to open no later than early November.

Any discerning visitor to Seminyak would be familiar with the sights, smells, sounds and surrounds of Ku De Ta, which opened 16 years ago and is renowned for its flair with food and cocktails, laid-back vibe and beguiling sunsets.

Primarily a lifestyle destination, Ku De Ta’s core focus is on food and beverages, with the Perth venue to feature three different themed restaurants, each with its own kitchen, and three separate bars.

Mr Palmer, and his wife Helen, are developers of On The Point, located at Point Fraser on the Swan River, and owners of Margaret River winery Palmer Wines. They met Ku De Ta founding partner Guy Neale after regular visits to Bali and have teamed with him to help recreate the feel of the Bali venue here on the river in Perth.